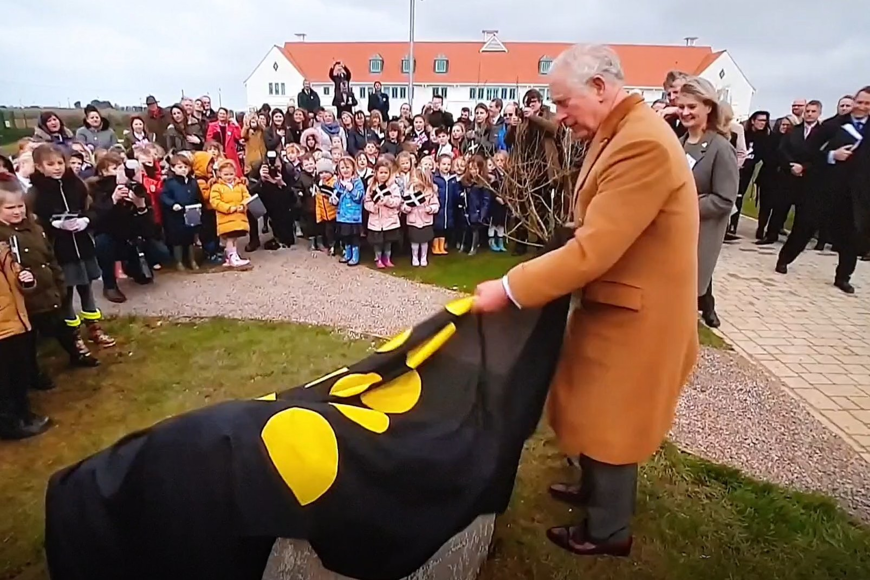 Nansledan School (‘Skol Nansledan’ in Cornish) was given an official royal seal of approval by HRH The Duke of Cornwall on Friday 6th March 2020, as The Prince arrived in the Duchy for one of his regular visits to the Nansledan development.

Nansledan School opened its doors to its first intake of pupils in September 2019 and is already a familiar, eye-catching landmark on the southern edge of Nansledan, the Duchy of Cornwall’s extension to Newquay. At full capacity, up to 420 pupils will get to experience the spacious and light 14-classroom school, which currently has 155 children on roll.

The Duke of Cornwall, accompanied by Colonel Edward Bolitho, the Lord-Lieutenant of Cornwall and the Isles of Scilly, was welcomed by the CEO of the Aspire Academy Trust Mrs Vanessa Bragg and Chair of the Trust Mrs Jacky Swain, before embarking on a tour of classrooms, led by Head of School Mrs Vicky Dilnot.

Nansledan School champions an integrated skills-based STEAM curriculum built around the principles of active discovery and experiential learning and to mark this auspicious day, the school was buzzing with activity, inside and out. St Agnes-based charity, Surfers Against Sewage, which recently announced The Prince of Wales as their Patron, were on hand to provide a special ocean plastics workshop for Key Stage 2 children.

Y4 pupil Lottie, who earlier presented The Prince of Wales with a Cornish pot of honey and Early Grey tea with class mate Harry, explained to their special visitor, “We are thinking about how we can have an impact on the problem of plastic and we are sorting out waste to help the environment”.

Down in Reception Class, five year old Whitney presented her handwritten letter and picture of The Prince of Wales which read, ‘Dear Prince Charles.  I love you.  My name is Whitney and I’ve seen you before’.

Outside in the playground, lively outdoor learning and Forest School sessions were in full swing and The Prince was particularly interested in what the Key Stage 2 children were getting up to. Year 6 Kayci explained they were creating their own fables, using story stones and homemade clay characters. “He asked me if we go out a lot and I said yes and told him about our Wild Wednesdays and outdoor learning afternoons”.

The tour concluded outside as Vicky Dilnot, surrounded by children waving their homemade St Piran and Union flags, invited The Prince to unveil a local granite plaque commemorating the proud final milestone in the opening of this ground-breaking new school.

Vicky Dilnot, Head of Nansledan School, said: “We feel so privileged to have been gifted such a beautifully designed school, a testament to the vision of the Duchy of Cornwall. It is the beating heart of a thriving and ever-growing community and I am sure I speak on behalf of all the staff and children, when I admit to still finding myself slightly awed that this building is actually ours!”

Vanessa Bragg, CEO Aspire Academy Trust, said: “Nansledan School is a landmark, not just architecturally but more so in the pivotal role it now plays in the lives of the children and their families in this vibrant new community. Since that moment, standing in a muddy, windswept field trying to visualise the architects’ plans, we’ve all been on an incredible journey.  But it doesn’t end here.  Our school will serve the children of Nansledan for generations to come and I am immensely proud that the Trust’s newest family member is already flourishing.”

Ben Murphy, Estate Director at the Duchy of Cornwall, said: “HRH The Duke of Cornwall has closely followed the progress of Skol Nansledan and we were delighted that the children were able to show their school off to him today. In establishing a high quality design and forward-funding its construction the Duchy has been able to deliver a very special primary school early on in the development of Nansledan. The Aspire Academy Trust has really embraced the ethos of sustainability and helped to establish the strong community spirit here.”